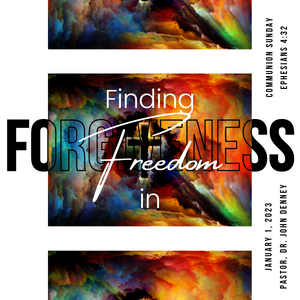 Have you ever heard a doctor say, “Be sure to take all of your medicine. Do not stop just
because you start feeling better. Finish all of it.” I have. Why do they say that? They understand
human nature. Once we start feeling better, we think we’re better and we need any more medicine.
Then, the infection or the problem doesn’t go away and we’re not sure why. Doctors understand our
tendency to quit taking our medicine the moment we start feeling better. You have to take all of the
medicine in order for it to do all of its work. So, Doctors tell us, “Be sure to finish all of it.”
The same thing is just as true spiritually as it is physically. God says, “Just follow PART of My
word, you need to follow ALL of it.” We respond by saying, “Okay God.” But we don’t really mean it.
We follow it until we start to feel better, then we slack off. “Thanks God,” we say, “I feel better
already. I’ll take it from here.” The symptoms go away for a while, but the problem is still there. Just
like the doctor, God understands our tendency to take only part of our prescription and not all of it.
This morning as we begin the first day of the new year, we’re going to look at God’s
prescription for forgiveness. Finding freedom through forgiveness. All of us have hidden wounds –
internal wounds that no one sees – hurtful memories, feelings of rejection, abandonment. Hidden
wounds, if not dealt with, become infected and turn into resentment and bitterness which inevitably
leads to gangrene. In a very real sense that’s what unforgiveness is – gangrene of the soul.
Where does unforgiveness come from? From life – from home – from society – from church –
from school – from the military – from work – hidden wounds come from all over.
Before we look at finding healing, I think we have to first look at why we struggle with
resentment.
Why Do We Struggle with Resentment? It’s normal. When people hurt us, our natural reaction is
to be resentful. It’s not the right reaction. It does more harm than good.
Jesus told a story once about a man who refused to forgive in Matthew 18. It’s called the
parable of the unforgiving servant. You know the story. A man is brought before the king for a huge
debt he can’t pay. He pleads for mercy and the king forgives his debt. As soon as the man steps
back out on the street he finds a man who owes him a relatively small debt. The ungrateful man
immediately demands payment. Finding the man unable to pay, he has him thrown in prison. The
king gets wind of it and calls the guy on the carpet then throws him into a torture chamber until his
debt was paid back. I want to give you two areas of resentment that you and I have in common with
this guy.
I. We have made it a habit. It shows we understand forgiveness. It says as soon as he left the
King’s presence, he immediately found someone who owed him a lesser debt. I get the sense it
wasn’t hard for him to find someone he had a grudge against. It was a deeply ingrained way of life for
him. It was a habit.
Have you ever met someone who makes it a habit of holding grudges? Rarely do they see it
as their problem – it’s always someone else’s. In effect, they’re saying, “I don’t really feel forgiven.
And if I don’t feel ‘forgiven, I don’t want you to feel forgiven either. If I don’t feel free, then I don’t want
you to feel free either.” Grudge-holding is the habit of listening to our feelings instead of our faith. It
says, “I don’t get forgiveness.”
Forgiveness is learning a new habit – taking God at His Word. It’s making the choice to stop
traveling down the same unhappy dead-end road. It’s realizing there has to be a better way of
dealing with our hidden wounds than being miserable. Job 18:4 Bildad says to Job, O you tear
yourself in your anger (Job 18:4). You’re only hurting yourself. Pain is inevitable, but misery is
optional.
When we really get a grip on understanding that through Christ God has forgiven us a debt, we
could never repay it changes everything. Our past, present, and future have been wiped clean by His
forgiveness. We begin to realize that every moment of our lives are being lived in the grace and
forgiveness of Jesus Christ – even though we don’t deserve one bit of it. Be kind to on another,
tender hearted, forgiving each another, just as God in Christ also has forgiven you (Eph. 4:32).
Resentment is a habit.

II. We’re unwilling. We’re unwilling to let go of our struggle with resentment. In Matt. 18:30, it
says the man who’d been forgiven was unwilling to forgive the man who owed him a lesser debt. So
the king threw him into the torture chamber.
Listen to what Jesus says after this: My heavenly Father will also do the same to you, if each
of you does not forgive his brother from your heart (Matt. 18:35, NAS). A man came to John Wesley
one time and said, I could never forgive that person. Wesley said, Then I hope you never sin. When
you’re unforgiving, you’re burning the very bridge you need to walk across. The moment you refuse
to forgive you are living a condemned life. You shut the flow of God’s blessings off to your life. Bitter
people can’t find forgiveness for the same reason a thief can’t find a policeman. They’re unwilling.
Were called to be professional forgivers.

How To Find Freedom Through Forgiveness

I. Realize that resentment is unreasonable. It doesn’t make sense. Job 5:2 says Surely
resentment destroys the fool (Job 5:2, NLT). It only destroys us. It doesn’t make us feel any better. It
makes us feel worse! As much as we would like to, the fact is we can’t change the past. Living in
resentment makes as much sense as drinking poison and waiting for the other person to die. That
doesn’t make sense.
Don’t get me wrong. Some of you have experienced horrible wrongs in your life. I don’t want
to minimize the wrong. This is not about the wrongs you’ve experienced, it’s about your response to
them. You can’t change the past, but you can choose your response to it. The first step is to realize
resentment is a choice that when you really think about it doesn’t make sense. It’s unreasonable.
II. Release your right to get even. This is very important. The apostle Paul wrote, Dear friends,
never take revenge. Leave that to the righteous anger of God. For the Scriptures say, “I will take
revenge; I will pay them back,” says the Lord (Rom. 12:19). The second step is to release your right
to get even. Now, before we walk through this, I want to give you four facts about forgiveness:
ONE: Forgiveness doesn’t minimize the offense. That would cheapen forgiveness. It’s not
saying, It didn’t really hurt. Yes, it did! Forgiveness doesn’t make this offense look any smaller in
God’s eyes. Forgiveness is for our sake, not the offender. We need can’t let the offense control our
lives. We have to go on. Forgiveness doesn’t minimize the wrong. It maximizes our ability to get
over it.
TWO: Forgiveness is not an instant restoration of trust. There’s a huge difference
between forgiveness and trust. Just because you forgive someone doesn’t mean you trust them.
Forgiveness is relinquishing the right to get even, but it doesn’t give back trust. Forgiveness is
instant. Trust is a process.
THREE: Forgiveness doesn’t mean the relationship will be the same. Just because you
give forgiveness doesn’t mean the relationship will go on the way it was so that person can continue
to hurt you. No. If a relationship is going to be restored there has to be repentance, and rebuilding of
trust over a period of time on the part of the offender.
FOUR: Forgiveness does not depend on the offender asking for it. Forgiveness is your
responsibility whether the person who wronged you asks you to forgive them or not. By making it
their responsibility, it allows them to control your life. Don’t do it. You have the responsibility to
forgive. Only you can make the choice to go on with your life, not the offender. Don’t give them that
power over you.
So, how do you give forgiveness? It is a process that you may have to repeat a thousand
times a day, day in and day out before you get through it. It’s not a one-time shot. It is a onetime
decision though. In the same way you chose to be resentful, forgiveness is the choice to forgive.
You might write a letter with all the hurts in it, then write, I forgive you in the power and love of
Jesus Christ Don’t send it! You may create more hurt. Wad it up and throw it away. Once you make
that decision, you stand by it reminding yourself you’re not going to replay the memories, re-explore
the feelings. Instead, you tell yourself – “I’ve made the choice to forgive that person.”
Forgiveness is first a choice of the will and then the willingness to maintain that choice.
Forgiveness is a process. It takes time. It’s a healing process. Release the right to get even.
III. Repay good for evil. How do you know when you’ve really released someone? When you
find you are no longer controlled by feelings of anger and hate.