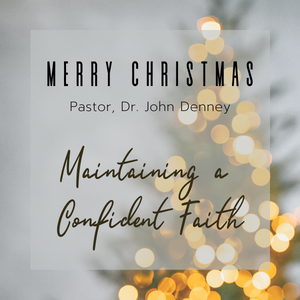 If you have your Bibles open with me to Luke 2. At Christmas we hear a lot about Mary, Joseph, the
Shepherds, the Magi, Elizabeth, Zechariah, and Herod. Who we don’t hear much is Simeon and Anna. We
probably don’t hear much because they seemed to play such a minor role in all the cast of characters.
This morning we’re going to focus on Simeon. His name means, “God had heard.” Less is known
about him than anyone else mentioned around Jesus’ birth. Luke gives us the impression he is old (v.26 & 29). Tradition says he was 113. Some think he was the son of the celebrated rabbi Hillel. Some even think he was the head of the Sanhedrin – the supreme judicial council of the Jews. If so, it’s not important to Luke.
What stands out to Luke is not Simeon’s supposed position or status, but his faith and character: this man was righteous and devout, looking for the consolation of Israel; and the Holy Spirit was upon him (v.25). His faith is like a brilliant diamond set against the backdrop of dark unbelief. He is a picture of what all of Israel should have been like had they taken God’s word to heart (Gal. 3:24). For thousands of years God had been promising the Messiah would come. And, for thousands of years people had been waiting and waiting for God to keep His word. Have you ever found yourself waiting for God? Wondering how and if He was really going to come through? You’ve grown impatient with God? Someone has said: Patience: accepting a difficult situation without giving God a deadline to remove it.
You may be wavering in your faith, and you need to be encouraged. Some of you need to really hear
from God this morning. You need God to quiet your anxious heart. You’re struggling in your faith, and you
need God to remind you that He is real, and His promises are sure. If that’s where you’re at, you’re not alone. Some of the greatest people of faith struggled with dark days of doubt and waiting. The author of Hebrews exhorted his struggling readers saying…do not throw away your confidence, which has a great reward. For you have need of endurance, so that when you have done the will of God, you may receive what was promised (Hebrews 10:35-36, NAS). Some of you need endurance – the encouragement to keep going, keep doing what is right. You need to be reminded the pay off at the other end will be worth whatever you’re struggling through right now (Rom. 8:18 I consider that the sufferings of this present time are not worthy to be compared with the glory that is to be revealed to us). Luke shows us through Simeon how to maintain confident faith. How To Maintain a Confident Faith. Three important straightforward decisions Simeon acted on: 1) Trust God’s Word. 2) Trust God’s Spirit. 3)
Trust God’s plans.
I. Trust God’s Word. And there was a man in Jerusalem whose name was Simeon; and this
man was righteous and devout, looking for the consolation of Israel; and the Holy Spirit was upon him
(Luke 2:25). To say that Simeon was righteous is to say that he was like Abraham (Gen. 15:6), he
was right with God because of his faith in God not his works for God. Four-hundred years before
Moses gave the Law, Abraham was saved because of his faith alone in God (Gen. 15:6). Do you
know what faith is? It is taking God at His Word. It’s not just belief alone, its belief coupled with
obedience. Luther said we’re saved by faith alone, but faith is never alone. The next word Luke uses
to describe Simeon is “devout.” It means that he lived what he believed. He walked what he talked.
He lived an exemplary life of taking God at His Word despite being surrounded by a sea of dark
unbelief.
Notice his focus: He was looking for the consolation of Israel – meaning he was patiently
waiting for God to send the Messiah. He stood out because he was a minority. Luke could not be
any clearer: Israel as a nation was not looking to God’s Word for the answers of their day.
Somewhere along the way they’d given up on God. Had they been looking they would have aligned
their lives with God’s Word like Simeon and been ready when Jesus arrived. The Holy Spirit would
have been alive and real in their lives like Simeon’s. But He wasn’t. Their lives were filled with life-
less empty mundane religion. Faith for them was simply going through a series of religious motions.
Jesus said the reason they didn’t recognize Him is because God was nothing more than a religious
hobby for them (Matthew 15:8, This people honors Me with their lips, but their heart is far away from
Me). In other words God wasn’t a necessity in their lives. Joni Erickson Tada said it well: Jesus will
never become a reality in your life until He becomes a necessity.
God says, If you seek me with your whole heart, you will find me (Jer. 29:13). Renew your
decision to trust God’s Word. Even if what He says is hard to swallow, painful to face – trust Him
anyhow. Even if you don’t understand or don’t feel like it – trust Him anyhow. Even if you feel
abandoned by God – trust Him anyhow.