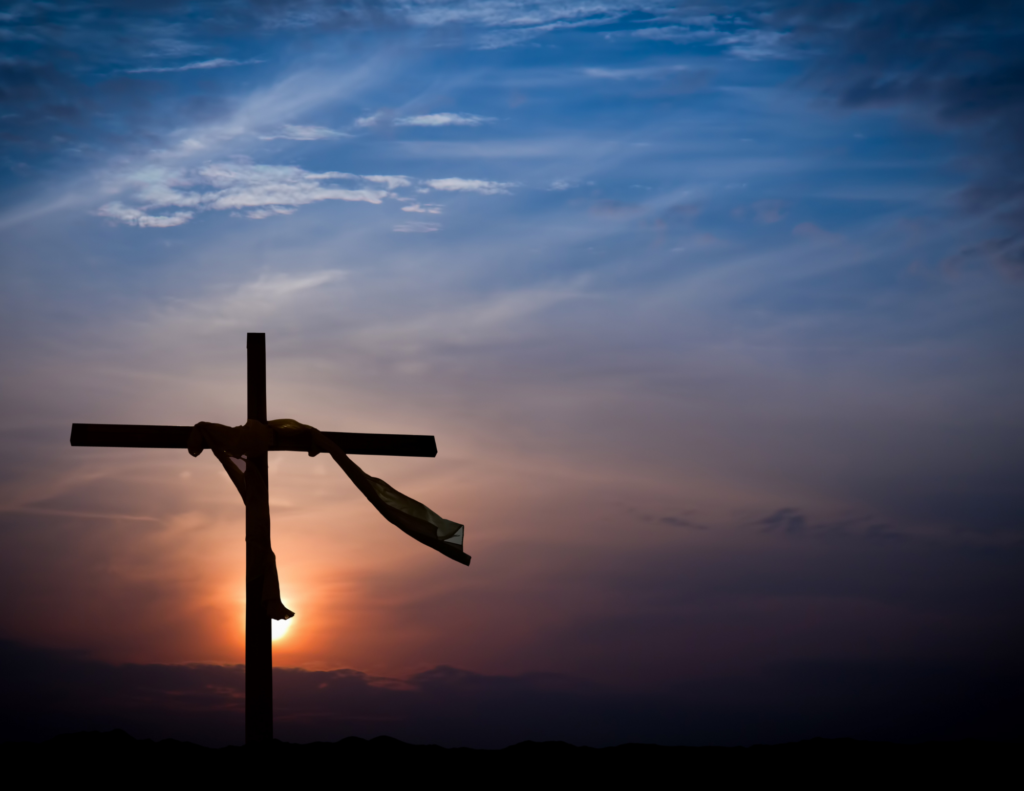 WHAT HELD JESUS ON THE CROSS?

I’ve read somewhere there are over 385 different kinds of crosses. The history of the cross is as diverse as it is ancient. Yet, the cross of Jesus Christ is unlike any other. No other cross has had such a profound and pronounced impact on our world. It is the cross of Jesus Christ that transforms our human condition burdened with sin and makes us a new creation. It frees us from the tyranny of death and the fear of death. It provides the only way to have peace with God and the peace of God. Only the cross of Christ offers God’s forgiveness and eternal life after death. No other cross can do that. Why is that?

I think a significant part of the answer to that question lies in answering another question: What was it that held Jesus on the cross? At any moment He could have called down twelve plus legions of angels standing at the ready with drawn sword to come to His aid. But He didn’t. On the very evening Jesus’ captors seized Him in the garden, He rebuked Peter after he made a failed attempt to rescue Him. Jesus asked Peter, Do you not think I cannot appeal to My Father, and He will at once put at My disposal more than twelve legions of angels? (Matthew 26:53). You may remember it took only one angel a single night to slay 185,000 Assyrian soldiers. With just one word, Jesus could have instantly destroyed His adversaries. But He didn’t. One day though He will. The Bible says at Jesus’ second coming a sharp sword will come from His mouth to strike down the nations who’ve rebelled against Him (Revelation 19:15). But on that fateful day two-thousand years ago, Jesus remained silent. Though He could have easily unleashed legions of mighty angels to come to His rescue, He didn’t. Instead, He chose the cross, He chose to endure its agonizing pain. What kept Jesus on the cross? It clearly was not because He was helpless. Had those held His hands to the wood as they drove the spikes through His flesh been aware of the massive and fierce legions of angels with drawn swords ready to cut them down, they would have recoiled in utter terror.

So, what was it that kept Jesus on the cross? If it wasn’t His captors, then maybe it was His severely weakened condition? Long before the cross He’d endured the agony of being severely and gruesomely tortured. His back and sides were a horrifying mutilated mass of exposed muscle, sinews, veins and bones having been violently ripped and shredded with a whip of braided leather cords with jagged bones and lead woven into them. But it was not even His severely weakened condition that held Him to the cross. We are greatly mistaken to think even for a moment He was somehow too weak or too consumed by His great suffering that He was not in complete command of every moment of His horrendous death. Jesus said, No one has taken it away from Me, but I lay it down on My own initiative. I have authority to lay it down, and I have authority to take it up again (John 10:18). His complete rational lucidity and commanding confidence shook His executioners causing them to utter with astonished bewilderment, Truly, this man was the Son of God! (Mark 15:39). They’d never witnessed someone die with such fearless calm as Jesus. Even in Jesus’ great weakness the combined forces of all the world’s might unleashed against Him could not have held Him to the cross. For even the weakness of God is stronger than men (1 Corinthians 1:25). What kept Jesus on the cross? It certainly was not the strength of His captors, nor was it His great suffering.

What was it that held Jesus on the cross? The Bible tells us it was Jesus love, His forgiving love for you and for me that bound Him to that instrument of hellish cruelty. For God so loved the world, that He gave His only begotten Son (John 3:16). Through the cross God was reconciling the world to Himself, not counting their trespasses against them (2 Corinthians 5:19). Though innocent of sin, He willingly took on ours. He exchanged places with us taking on our punishment and giving His forgiveness and righteousness in return. What held Jesus on the cross? Jesus love, a force more powerful than death, than the grave, than all the forces of hell.

The world doesn’t understand this. It can’t. To the world, the cross is foolishness. A famous piece of early-third century Roman wall art, the “Alexamenos graffito,” depicts two human figures,

one on a cross and another below it looking up in prayer. The figure on the cross is Christ but has been given the head of a donkey. The caption beneath reads: “Alexamenos worships his god.” Christianity is ridiculed by many as a religion for fools. The Bible says, For the word of the cross is foolishness to those who are perishing, but to us who are being saved it is the power of God (1 Cor. 1:18). For Christians, the cross holds a deep meaning. It was Jesus love for a lost and dying world that held Him on the cross. The cross profoundly reminds us the single greatest force in the world is the love of God.

I’m reminded of a story that helps put The Cross of Christ into perspective. In 1967 a young University of Cincinnati College student was struggling through the issues of his faith. His name was Charles Murray. He was an Olympic prospect and a very skilled high diver. He was not raised in a Christian home and was struggling with God over some of the issues his roommate discussed about the forgiveness of sin and the saving power of The Cross. Charles began reading the New Testament and continued to debate spiritual issues with his roommate. For some reason, the clarity of God’s message did not reach Charles’ heart. He became frustrated with his confusion and refused any further discussions on this topic with others. Because he was training for the Olympic games, Charles had special privileges at the University pool facilities. One evening he became very restless and confused with his spiritual struggle and decided to spend some additional time practicing dives. Sometime between 10:30 and 11:00 PM he went to the pool. It was a clear night in October and the moon was full and bright. The University pool was housed under a ceiling of glass panes. The moon shone brightly across the top of the wall in the pool area. Charles came through the back door, put down his gear, and immediately climbed the tall ladder leading to the highest platform. He believed that there was no need to turn on the pool lights because the glow of the moon filtered enough light into the building. At that moment the Spirit of God began to convict Charles of his sins. All the Scripture he had read, and all the occasions others witnessed to him about Christ flooded his mind. He stood on the platform backwards to make his dive, spread his arms to gather his balance, looked up to the wall, and saw his own shadow on the side of the pool building. The moonlight silhouetted his body projecting the shape of a cross on the stark, white wall. When he saw the cross, Charles could bear the burden of his sin no longer. His heart broke as he sat down on the platform and asked God to forgive him and save him. He trusted Jesus Christ on a twenty-foot platform with only the walls of the building to hear his confession. Suddenly, a door opened and the lights of the pool area came on. One of the maintenance workers had come to check some work he had been doing on the pool. As Charles looked down from his platform he saw an empty pool, which had been drained for repairs. He had almost plummeted to his death, but the cross had stopped him from disaster. Accepting the sacrifice of Christ death upon Calvary’s Cross can keep us from the disaster that our sins deserve. Only the cross of Jesus can spare us from God’s wrath against our sin. All of us have broken God’s laws. All of us have lied, cheated, stolen and committed a thousand other offenses. Only the cross points us the way to God’s forgiveness and to eternal salvation. Good Friday reminds us about the importance of Calvary’s Cross and the following resurrection. Other religions do not have a risen Savior. Praise God our hope is in Jesus who conquered death and who promises each believer life after death.