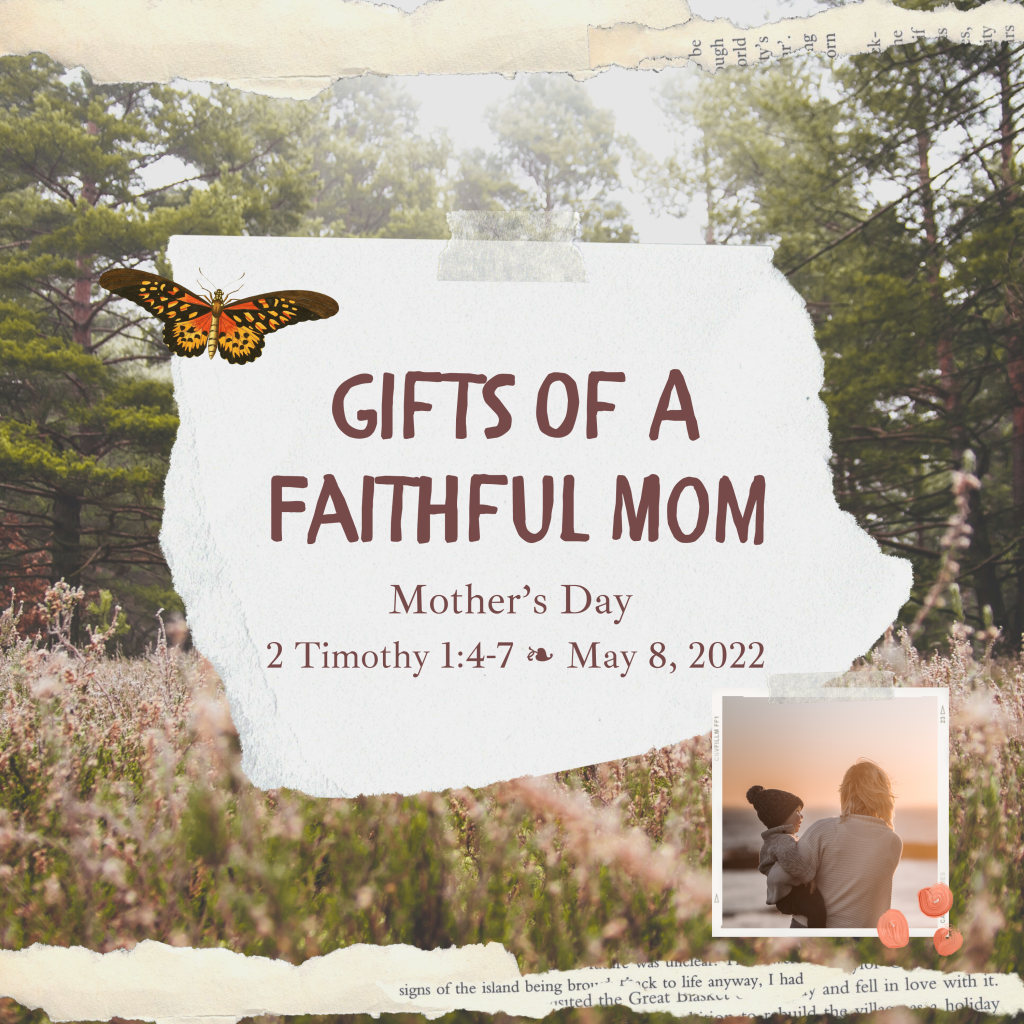 Gifts Of A Faithful Mom

I want to begin this morning with a question: How many of you have a mom? Then this will apply to all of us.  We are thankful for our 85.4 plus million moms across America and more than two-billion moms around the world.  We love to give to our moms because our moms have given a lot to us.  For the most part, moms are naturally givers.  I read this last week about a mother who found a bill left on the breakfast table made out by her eight-year-old son Bradley.  Mother owes Bradley: for running errands – .25 cents; for being good – .10 cents; for taking music lessons – .15 cents; for extras – .5 cents. Total – .55 cents.  Young Bradley’s mom just smiled and didn’t say a word.  Later that day at lunch, little Bradley found the same bill next to his plate with .55 cents and another piece of paper neatly folded next to it.  Opening it he read – Bradley owes Mother: for nursing him through scarlet fever, nothing; for being good to him, nothing; for clothes, shoes and playthings, nothing; for his playroom, nothing; for his meals, nothing. Total: nothing.

The Bible is full of moms who through their quiet, loving, and patient giving changed the world.  We’re familiar with some of them – Hannah, Ruth, Elizabeth, Mary – they women of faith and moms at the same time – an unbelievably powerful force.

This morning we’re going to look at a mother and grandmother who we know very little about.  In fact, they’re mentioned only once in the Bible. But what we do know of them we learn from the fruit of their parenting and grandparenting.  They are so unknown that when I say their names you probably won’t have a clue who I’m talking about.  Their names are Lois and Eunice.

Turn with me in your Bibles to 2 Timothy 1:4-7.  2 Timothy comes from the hand of Paul shortly before his own death.  It is a book written by a man who knew his life was coming to an end.  Setting in a Roman prison awaiting execution for his faith in Jesus Christ, he finds himself reflecting on fond memories of his past.  One of those was his son in the faith Timothy.  He says of him in 2 Tim. 1:3 I thank God, whom I serve, as my fathers did, with a clear conscience, as night and day I constantly remember you in my prayers…. His thoughts are like that of an aging father reflecting on his life to his son.  I want you to notice his words are not filled with regret – he has no remorse for being a follower of Jesus.  He was not ranting in bitterness, though he felt intensely forsaken by others.  He was not shaking with fear, though he knew his own violent death was imminent.  His thoughts instead are marked by thankfulness.  He knew where he was going.  He knew he’d fought the good fight. As for me, my life has already been poured out as an offering to God. The time of my death is near (4:6-8).

The Lord will rescue me from every evil attack and will bring me safely to His heavenly kingdom (4:18).

While he’s thinking of young Timothy, he recalls his childhood.  He notes that it was Timothy’s mother and grandmother who had a significant hand in shaping the boy’s life.  Read: 2 Tim. 1:4-7.

grandmother Lois and in your mother Eunice and, I am persuaded now lives in you(v5).  A powerful gift moms of faith give their children is an authentic spirituality – a sincere faith in Christ.  Circle the word “sincere.”  It means genuine through and through.  From an early age Timothy saw this in his mother and grandmother.  In the very next chapter, Paul says, from childhood you have known the sacred writings which are able to give you the wisdom that leads to salvation through faith which is in Christ Jesus(2 Timothy 3:15). “As I think about you,” Paul reflects, “I am reminded of a man who is genuine in your Christian life. That’s something your mother Eunice and grandmother Lois taught you from Scripture.”

Real Christianity is taught more in the home than anywhere else.  The church, Christian schools, Bible studies, Sunday School, have a lot to teach us, but there is no teacher like the home.   A child’s faith doesn’t become real until they see it flow from your own life.

Four scholars were arguing once over Bible translations.  One said he preferred the King James Version because of its beautiful, eloquent old English.  Another said, he preferred the American Standard Bible for its literalism; the way it moves the reader from passage to passage with confident feelings of accuracy from the original text.  A third man preferred the Moffat translation because of its quaint, penetrating use of words, the turn of a phrase that captures the reader’s attention.  After giving the issue some thought, the fourth scholar admitted, I have personally preferred my mother’s translation.  When the other scholars chuckled, he went on, Yes, she translated it.  She translated each page of the Bible into life.  It is the most convincing translation I ever saw.

Susannah Wesley was the mother of 17 or 19 children (I’ve read both numbers).  Two of her sons – John and Charles made a profound impact in our world. John led countless thousands to the Lord preaching over 40,000 sermons and traveling more than 250,000 miles on horseback!  Charles was a great hymn writer writing more than 6,500 hymns. Susannah made time each week to counsel her children about Christ and her influence stuck and through her sons changed the world.

Famed preacher Dr. G. Campbell Morgan had four sons. They all became ministers. At a family reunion, a friend asked one of the sons, “Which Morgan is the greatest preacher?” While the son looked at the father, he replied, “Mother!”  Mom’s, no pressure here!  Never underestimate the sincerity of your faith in Christ.

power (v.7).  The same spirit of power and love and discipline – a spiritual confidence was evident in Timothy’s mother and grandmother.  This was not, in the words of one commentator, a bare, fleeting, momentary feeling, but an abiding, indwelling principle (A commentary on the Holy Scriptures: 1 & 2 Timothy. p. 83).  This was a humble unwavering boldness.

The word power has the idea of an inward strength that maintains a rock-solid faith despite life’s obstacles and dangers.  Oswald Chambers put his finger on it when he wrote, Confidence in the natural world is self-reliance, in the spiritual world it is God-reliance. It was this same God-reliance that was now evident in young Timothy that was first seen in his grandmother and mother (v.5).  When the will of Henry J. Heinz, wealthy distributor of the famous “57 Varieties” line, was read it was found to contain the following confession: “Looking forward to the time when my earthly career will end, I desire to set forth at the very beginning of this will, as the most important item in it, a confession of my faith in Jesus Christ as my Saviour. I also desire to bear witness to the fact that throughout my life, in which there were unusual joys and sorrows, I have been wonderfully sustained by my faith in God through Jesus Christ. This legacy was left me by my consecrated mother, a woman of strong faith, and to it I attribute any success I have attained.”  Moms communicate a God-reliance when they model a quiet steady faith in Christ. That’s what Timothy’s mother and grandmother did.

A math teacher asked his student if he had 8 people in the family and they cut up a pie, how much would he get? The boy answered, “one seventh.”  “I’m afraid you don’t know your fractions,”said the teacher. “Remember, there are 8 of you.”  “Yes, but you don’t know my mother.  My mom would refuse her share of the pie so everyone could have just a little more.”

This is the third gift Timothy received – unselfish love.  Paul personally knows Timothy’s mother and grandmother.  He’s watched how they related to him.  He saw unselfish love.  I am convinced that a mother’s love paves the way for a child to begin to understand God’s love. In fact, in the Bible motherhood is used to illustrate the relationship between God and his people.  Unselfish love is priceless.

How does a mom show unselfish love? There’s really no end of ways that could be told.  But there is one Paul doesn’t mention, but I am confident was true of Eunice and Lois – prayer.  There is no doubt in my mind Timothy was covered in prayer day and night by his mother and grandmother.

Paul was on his second missionary journey in Lystra (present day Turkey) when he first met Timothy.  It was then Paul decided to take this young man with him to proclaim the Gospel and plant churches.  Timothy worked with Paul in at least five New Testament churches (1Thessalonians 3:1 – 2, 1Corinthians 4:17, Philippians 2:19 – 22, Acts 17:14 and 1Timothy 1:3).  Paul knew better than anyone the immense danger they would encounter.  He candidly shared of his hardships and persecutions he faced.  You can bet this no doubt caused great concern for Eunice and Lois that moved them to constant prayer.

self-discipline (v.7). Teaching children to manage their feelings, their words, their thoughts, their actions are no small task!  Self-discipline speaks of consistency, balancing tenderness, and toughness in a child’s life.

A study was done once of some 1,738 normal middle-class boys and their families, beginning in the pre-adolescent period following them through young manhood.  After identifying the boys with the highest self-esteem, their homes and childhood influences were compared with those have a lower self-worth.  Three very important characteristics were found that distinguished them:

1.  Genuine love. The high-esteem children were clearly more loved and appreciated at home than were low self-esteem boys.  The parental love was deep and genuine, not just an empty display of words.  The boys knew they were the object of pride and interest, increasing their own sense of self-worth.

2.  Healthy Boundaries. The high-esteem parents were significantly stricter in their approach to discipline.  By contrast, the parents of the low self-esteem group created insecurity and dependence by their permissiveness.  The children more were more likely to feel the rules were not enforced because no one care enough to get involved.  Strict accountability and responsibility were found in the homes of high self-esteem.  Family ties were the strongest.

3.  Freedom of personality.  Homes of high self-esteem boys were characterized by democracy and openness.  Once the boundaries of behavior were established, there was freedom for the individual personalities to grow and develop.  The boys could express themselves without fear of ridicule, and the overall atmosphere was marked by acceptance and emotional safety.

Moms – you matter.  You matter in our lives far more than you have any idea.  For the hand that rocks the cradle,wrote W.S. Ross, is the hand that rules the world. Those are just some of the gifts of a faithful mom: a sincere faith, spiritual confidence, unselfish love, and self-control.